Learning to muster cattle with your daughter is made easier when you’ve got Hugh Jackman’s trainers behind you every step of the way.

It’s the kind of scene that wouldn’t look out of place in a Judd Apatow comedy – a mother-and-daughter duo strolling across the grounds of the horse-riding school, Cowboy Up, dressed like two urbanites trying to hail a cab.

“Erm, we’re here to muster some cattle,” I smile weakly as our hosts rush up to greet us and my little one tugs at my suddenly offensive leather jacket. “You can’t wear leather around cows, Mum,” she hisses at me as we move in to fill in some pre-muster paperwork. “They’re going to know you’re wearing their cousins and they’re going to hate you,” she adds. Well, this is going to be quite an experience.

We’re in the lush, rolling hills of Queensland’s Crows Nest where Pete and Gillian Gould are clearly used to city-slicker types requesting their services. Back in 2007, Peter trained Hugh Jackman and Nicole Kidman to ride horses for a little-known movie called Australia, and he has also spent years training everyone from members of royal families to garden-variety actors for commercials. Kids, he reckons, are remarkably easy to teach,  and he insists that no matter how little faith I have in our abilities, we’ll be riding  – and mustering – like champions in no time at all.

Now, being expected to muster cattle when you’ve only ever ridden a horse (badly) once before feels an awful lot like being the world’s worst cook yet finding yourself in the position of doing the catering at Gordon Ramsay’s wedding.  Yet, bypassing the resident cat, who’s so pig-headed that all the horses sidestep around her, and the two working dogs happily running alongside us, my daughter calmly climbs atop her horse as though she’s lived her whole life on the land  (a pretty big stretch for a kid raised around the streets of Sydney’s Kings Cross).

I’m given a beautiful equine by the name of Missy, a horse Gould assures me will work well with my nervous nature and craptastic abilities. Of course, the minute I get in the saddle, another horse mounts her and I’m stuck in the middle like a well-worked crash-test dummy wondering if this is how I’m going to die  in front of my first-born. “Don’t worry,” Gould smiles as he “uncouples” the horses. “All you have to do is listen to  my instructions carefully and everything will be okay.” 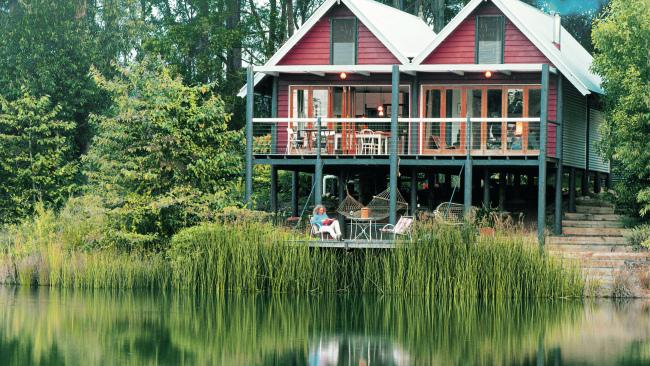 Fortunately, we’re soon off, putting some distance between Missy and the others as members of the group learn to ride within a small and perfectly comfortable ring. We’re taught the essentials (how to stop, start and turn) and once we show we can do all three without hurting anyone, the gates around the riding school open up and dewy, rolling hills dotted with gorgeous brown cows and their calves unfold before us.  It’s so picturesque that it’s easy to lose all sense of space and time. Also, it’s really easy to believe you are essentially The Man from Snowy River.

My daughter shows herself to be a complete natural right away, but emotions are quickly heightened when she asks about the housing arrangements of the sweet little calves hanging with their own mamas and is told they’ll all be shipped off once they hit the 18-month mark. “Ooh, where are they going?” she innocently asks, no doubt expecting the calves to be knocking back Mojitos on some sunny island. “Well, that’s when they get slaughtered for their meat,” comes back the reply. And, with that, we ride on – my daughter trying not to sob hysterically and me shouting, “Nooo! He was just joking! They all move to Majorca in the end.” 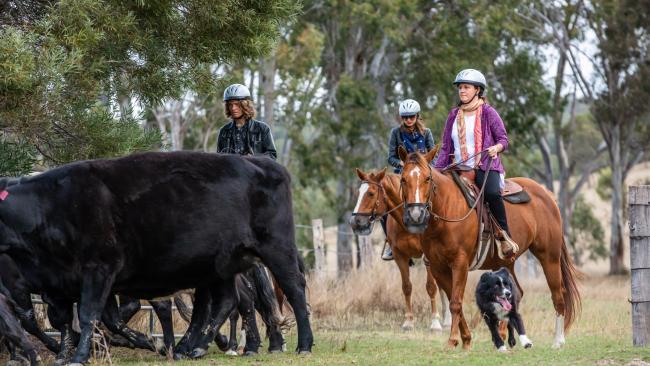 If us city-slickers can suddenly ride horses, anyone can and there’s nowhere better to learn than at Cowboy Up.

Fortunately, the time to muster arrives and it’s a welcome distraction.  I won’t lie. The first few minutes as the horses trot faster and we work hard to stay on are far from pretty. The faster Missy trots, the harder I get flung around like a log wrapped in leather, but just as I’m about to quit and throw myself off in a rolling jump, something just clicks and  I get it.

Somehow, I manage to execute all the right moves to get the cows (even the really angry ones) down the hills, past the trees, and behind the fences where they’re to spend the night. The best part? By the time I get to the finish line, my daughter is already dismounting in a jubilant fashion. (Oh, god, I hope she’s not going to start asking me for a pony.)

“See! I told you that you could do it,” Peter tells me afterward as we pause for tea. I wait for him to say, “If you can do it, anyone can do it,” but he’s a better human than that so I’ll say it. If these city-slickers who normally can’t catch as much as a cold can suddenly ride horses like Olympic equestrian Zara Tindall (ahem), anyone can and there’s nowhere better to learn than at Cowboy Up.

The writer and her daughter were guests of Tourism and Events Queensland. 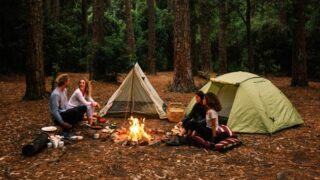 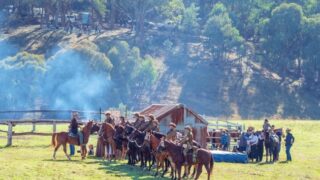