Four days ago they were strangers, but now, they’re comfortable enough to drop their pants when Eagle Rock plays.

Granted, more than a few bottles of Dal Zotto’s sparkling and the inviting warmth of nightly campfires have helped us get to know each other, but the considerate, seamless hospitality and wealth of knowledge from the Spicers staff made us feel at home, relaxed and confident in the Gondwana Rainforest. 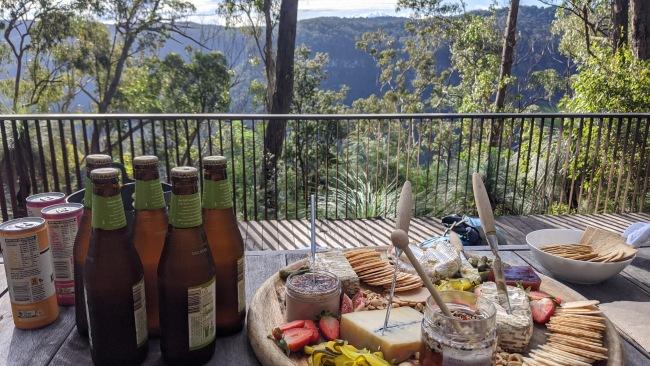 At the end of each day’s hike, we were greeted with a spread of local cheeses and home-pickled sides, and an array of drinks

Four days ago, we introduced ourselves one-by-one as Spicers host Trev navigated our hardy minibus through muddy potholes left by the floods. Skipping overwork, our guides instead wanted to know our hiking history and why we wanted to hike the Scenic Rim Trail.

Dressed in seasoned hiking shirts, with some wearing thirty-year-old leather boots, we rattled off the Kokoda track and Everest base camp as past conquests. But at the back of the bus, one hiker sat apprehensively shifting in his pristine boots. 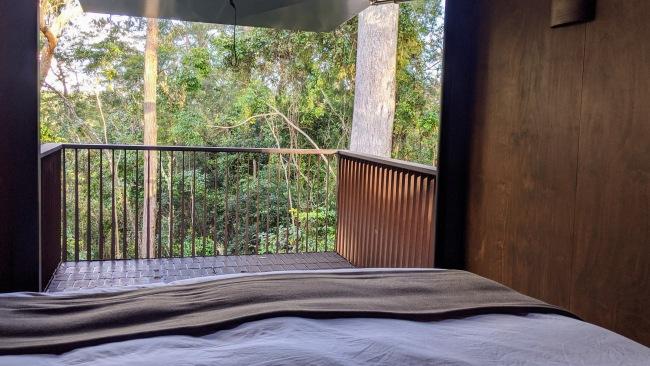 On nights 2 and 3, you sleep with your room open to the forest, kept warm with thick doonas and electric blankets

“Hi, I’m James, and this is my first hike. I booked this trip on a whim and I have no idea what I’m doing. Was I meant to wear gaiters? Some of you are wearing gaiters!” An inner-city Melbournian, spending four days out of phone reception with a bunch of daggy hikers and some trees was far from his usual holiday.

I too was doubtful. This was my first guided hike, I was used to setting my own pace and walking with friends. The idea of being in a tour group to experience nature seemed contradictory to me. It didn’t help that the group was made up of my parents and some randoms all at least twenty years my senior.

Day one started with a steep, zig-zagging climb to get us onto the mountain range, depleting any confidence James had left for the days ahead and worrying Brooke with her injured foot. But, recognizing the group’s different paces, our guides Scott and Carl made timely stops to point out the changing vegetation as we climbed higher.

Where the native spear grasses replaced lantana, someone noticed a flash of banana yellow hopping above us. “That’s a Golden Whistler,” whispered Scott before rattling off what the bird ate, how it built its nest, and it’s mating rituals. Starting to move again, we asked our walking bird encyclopedia about the other songs and calls we could hear. He identified every one. 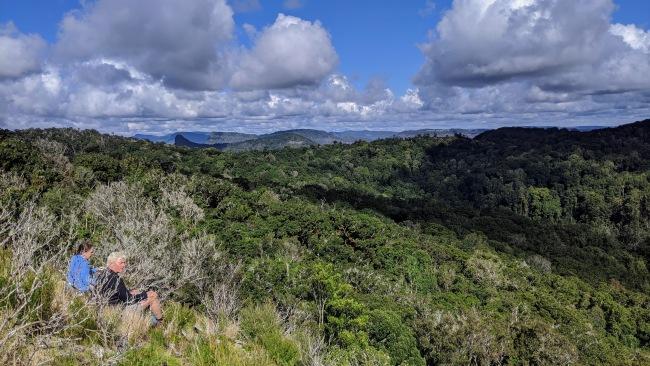 After a homemade wrap and hot tea, Carl talks to us about totems. A totem is a natural object that First Nation Australians inherit from their clan or family as their spiritual emblem. “As your totem, you are responsible for looking after that species, as well as the sites it lives in,” says Carl.

“But a totem may also choose you,” adds Scott. He and Carl tell us of their experiences of feeling a spiritual connection, of their totem choosing them. They ask us to think about what ours may be throughout the hike. Touched by the intimate stories, we set out in quiet contemplation.

“I think my totem might be fungi,” says James, taking his phone out to snap the bright orange crinkly crown-shaped fungi protruding from a fallen log crossing the path. His kids have been replaced by the colorful growths on his camera roll.

“Big responsibility you’ve taken on there,” chuckles Scott, unsure whether we’ve understood what a totem is. The Fungi kingdom makes up roughly a quarter of all biomass present on earth. 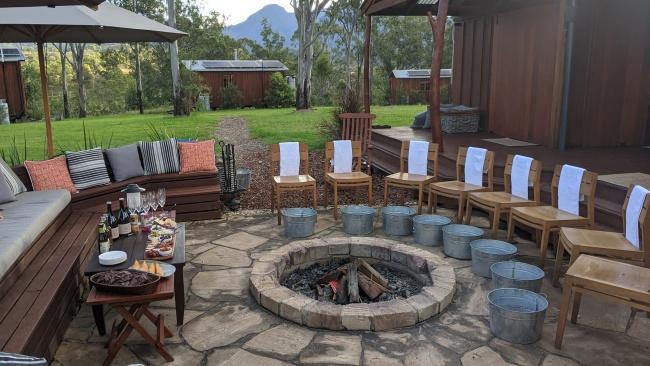 A surprise foot bath with drinks and cheese board at the end of the trail, night 4

Scott says he’s never seen so much of it in the three years they’ve been doing the Scenic Rim Trail. One positive of the recent Queensland floods has been the return of the damp, muddy earth fostering new forest growth. The guides show us photos of the forest from 2020 after the fires, and it’s unrecognizable today, the forest is completely stripped bare of any fresh green.

On day two, we stop at the fringe of the rainforest. Behind us, grass trees and spear lilies populate the path edges, decorating the steep drop-off into the valley. In the distance, you can just make out the skyscrapers of Brisbane.

Looking ahead, a looming canopy filters speckled patches of the sun onto a quilt of ferns and cordylines. The guides explain the act of ‘forest-bathing’, or Shinrin-yoku. Though it’s been practiced for thousands of years, it was only coined in 1982 by the Japanese Ministry of Agriculture, Forestry, and Fisheries. 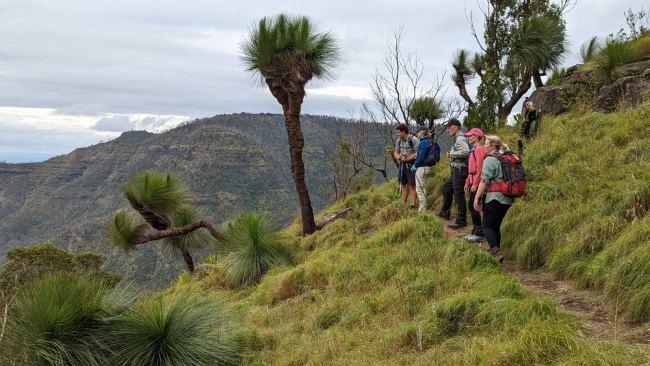 Day 1’s scenery: grass trees and spear lilies cling to the cliff which looks out towards the coast and Brisbane

The practice centers around absorbing the atmosphere of the forest, the guides explain. To do so, we will separate, walking the next section solo. “Stop and close your eyes, smell and hear the forest,” says Scott.

One by one, group members are swallowed by looming giant stinging trees and strangler figs. Each day we practiced Shinrin-yoku, and each day we became more attuned to the layers of sounds, smells and textures of the species coexisting with us.

Before we cross Dalrymple creek on day three, Scott points out dark green foliage at our ankles rooted in the banks of the creek. Like much Australian flora and fauna he tells us, the herbaceous plant was named by explorers attempting to make far-fetched connections to plants they were already familiar with. “This is Rainforest Spinach,” says Scott. “They thought it looked like spinach, and it grows in the rainforest.”

But this weedy nettle that to me looks nothing like spinach is an intrinsic part of the endangered Mountain Frog’s life cycle. The Mountain Frog, or philoria kundagungan, uses Rainforest Spinach leaves hanging over the creek’s edge to lay their frogspawn. The 2019/2020 fires drastically depleted the spread of the plant, so we are told to tread carefully around the remaining knife-shaped leaves lining the creek.

Our second guide, Carl, tests the stability of rocks before offering a steadying hand to help us safely cross the rushing waters. Midway, he points out the frenzy of darting tadpoles at our feet, the next generation of Mountain Frogs. 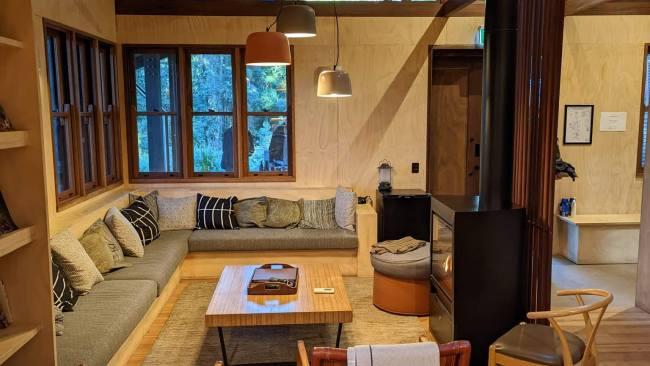 Inside one of the ecocamp’s communal lounge space

The Spicers guides’ passionate insights into the intricate ecosystems of the Gondwana Rainforest gave us an appreciation and awareness of the environment unattainable on a self-guided hike. Their attentive yet laid back nature absorbed the complicated logistics of transporting our luggage from lodge to lodge, people’s injuries and varying personalities.

Prepared for every type of person, they would radio ahead and let the hosts of each lodge know who they were about to meet and what they liked to drink. Apparently, we were ‘tea drinkers’, but the exorbitant amount of alcohol laid out for us at every stage of the evening said otherwise.

My skepticism about taking a guided tour has completely evaporated since.

Not once when hiking with friends have we walked a section alone, and barely ever do we stop to appreciate the animals and plants we are taking the hike to see. On the last morning, James told us he had already booked his next adventure, and though we warned him this might be the most luxurious and well-run hike he’ll ever go on, he didn’t seem perturbed.