Being able to do it all with a dry bum and no hands. I didn’t know Hobie kayaks even existed until Aran Price at Launceston Kayak Tours held one steady for me alongside a pontoon while I slipped into its raised mesh seat. “No one’s ever fallen in who didn’t deserve to,” he reassures me.

It’s pedal-propelled, leaving me free to hold my camera (or morning coffee, for those inclined), and is steered via chunky dials next to the thighs. After a few practices turns, we head off from Old Launceston Seaport on a 90-minute tour that will give a view of the city possible no other way.

The morning sun casts a golden glow across houses dotting the hillside that backs kanamaluka / Tamar River, tricking my mind into thinking the brisk air is warmer than it actually is. Technically, the Tamar is an estuary – a brackish waterway stretching to the sea 70km north – and Launceston is positioned at the confluence of the North and South Esk rivers that feed it.

Push, push, swish, swish. My feet gently press the pedals while I soak up the surrounds: an assortment of fishing boats moored midwater, a quaint 1830s flour mill – now the swanky Stillwater restaurant and accommodation – and the historic wrought-iron Kings Bridge. We glide beneath it to slip between the dolerite walls of Cataract Gorge and suddenly we’ve left the city behind for a slice of the wild. Birdsong resounds. Fish splash.

The gorge is Launceston’s most treasured recreation area, but while most enjoy its walking trails, scenic chairlift, outdoor pool, and Victorian gardens complete with peacocks, we get an altogether different perspective gazing up at walls nearly 50m high and littered with well over 600 rock-climbing routes.

It’s immensely peaceful. Greenery sprouts from between boulders and, near the rapids at the far end of the gorge, the river’s dark surface are laced with cream foam – a natural result of agitated tree tannins.

“Sometimes we get even get seals resting up here,” Aran says.

We backtrack past Seaport to explore up the North Esk River, passing the neoclassical Customs House and mammoth James Boag’s Brewery – both built in the late 19th century.

“It’s a toss-up as to which one is more important,” quips Aran.

Our paddle only finishes in time for breakfast, but I know which one I’ll be visiting later.

Peppers Silo Hotel is located on the river

● Launceston Kayak Tours operates 90-minute tours throughout the day, departing from Old Launceston Seaport (in front of Rupert & Hound restaurant). Exact timings may change slightly due to tides and weather.

● Come as you are. Street clothes and shoes are fine but consider bringing a hat.

● Launceston Seaport has plenty of restaurants to choose from for a pre-or post-paddle bite or drink.

● Stay at Peppers Silo Hotel, located right on the river and a few minutes’ walk from the launch site. Converted from four historic grain silos, rooms have curved walls and plush interiors. Don’t miss the opportunity to take housedog Archie the black labrador for a walk. 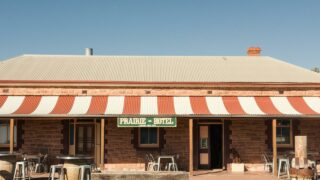 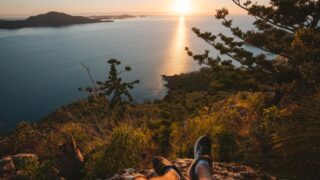 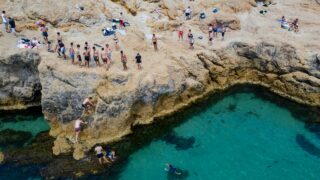