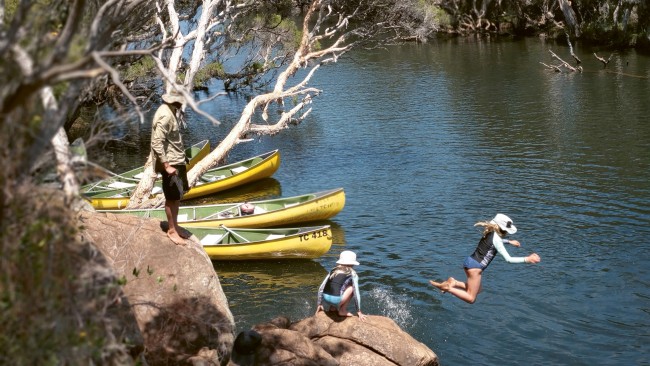 That’s because that name refers at once to a river, a town, and a sprawling wine region. And no matter which Margaret River you visit the experience is never complete without something to eat, a lesson that will be reinforced many times during my visit.

I’m on a canoeing trip with Bushtucker River & Wine Tours and as we paddle my guide Chelsea points out silvery coastal rosemary bushes that smell of pine and tropical fruits, bright pink flowers of succulent pigface that will soon be ready to eat and peeling paperbark trees whose thin sheets of bark are perfect to wrap and even cook food in.

For the Wadandi Boodja traditional owners, this whole region was like a giant supermarket, providing everything they needed to survive. Fortunately for me Chelsea has already done the shopping, and when we pull our canoe onto the riverbank she sets up a picnic with a range of snacks including emu sausage, rosella chutney and wattleseed and bush tomato bread. 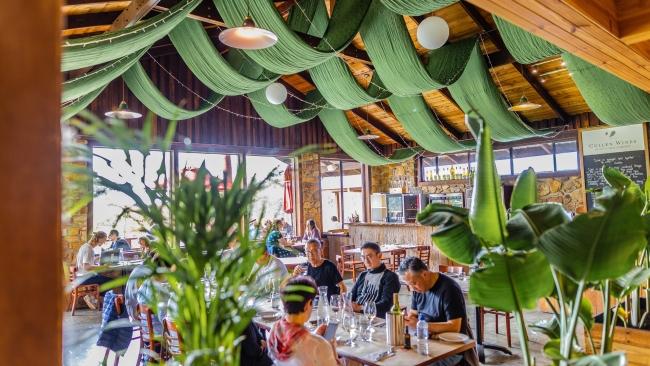 Native Australian ingredients are also on the menu at Cullen Wines, though rather than foraging for them the kitchen team simply walks over to garden beds planted with zesty Geraldton wax, herbaceous saltbush, and briny seablite. Sitting in the shade of a grand old peppermint tree by the cellar door, chief winemaker Vanya Cullen explains that delicate white flowers sitting atop the trees like a dusting of snow mark the changing of seasons from Kambarang to hot, dry Birak in the Wudandi Boodja calendar, which helps to inform her approach to farming and viticulture.

The edible garden provides much of the produce for the onsite restaurant, and as we talk I bite into snow peas that snap with a satisfying crunch and peppery baby white radishes covered in tangy sheep’s yogurt and a crumb of cocoa and garlic. The dish is modestly billed as a “chef’s snack from the garden” and leads to an even more impressive main course of pan-fried jewfish with fragrant dill flower, tomato, and caper salsa, charred spring onion, and confit fennel that pairs beautifully with the sublime Kevin John Chardonnay. 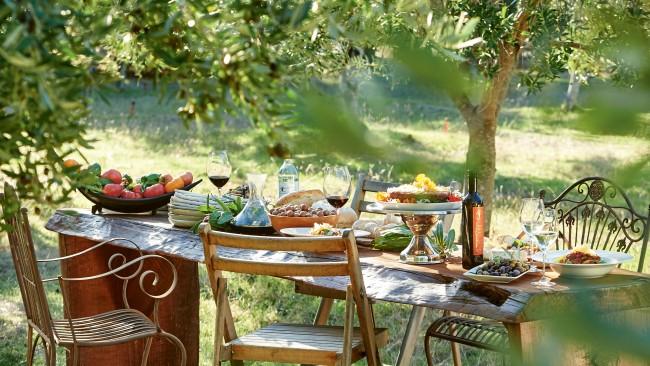 Grapes are without doubt Margaret River’s most famous crop, but the fertile region has other tricks up its sleeve. At Olio Bello the 8000 olive trees are split into groves of 14 separate varietals, and the enomatic machine they’ve just purchased for tastings gives an indication of how seriously they take their unfiltered oil.

After a brief lesson in technique (first smell the oil, then let it sit at the back of the tongue for a few seconds before swallowing and waiting for the peppery kick) general manager Brett Roberts takes me on a guided tasting me through several of his favorite varietals.  The Arbequina is “the equivalent of a pinot” with a subtle grassiness and plenty of fruit while the Kurunba amps up the freshly cut grass flavours and the Romanza is “more like a cabernet” with a robust flavour and a big kick of pepper and bitterness. 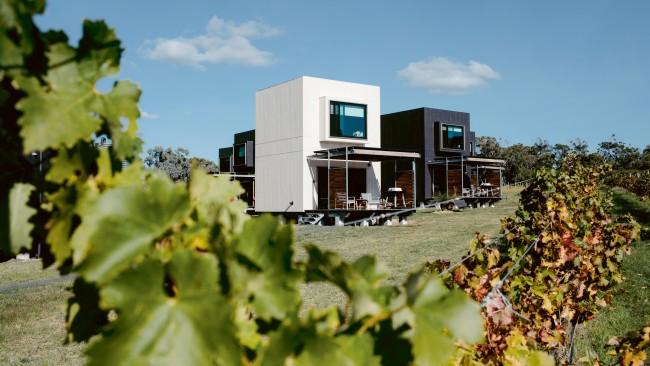 Wandering outside, I can once again hear the boom of crashing waves in the distance – because the entire region hugs the coast the ocean is never far away, though it’s sometimes invisible for long stretches. That’s part of the reason it takes me two nights to realise that my accommodation at Barn Hives is just five minutes from the beach. I don’t quite make it there for sunset, though, instead watching the resident ducks parade between their coop and the cabernet vines that begin just metres from the deck of my surprisingly roomy pod. A bedroom occupies the entire upper floor, while the large open kitchen is well-stocked with bread, cheese, olives, wine, and fresh eggs from the onsite providore. I’ve got something slightly fancier in mind for dinner, though. 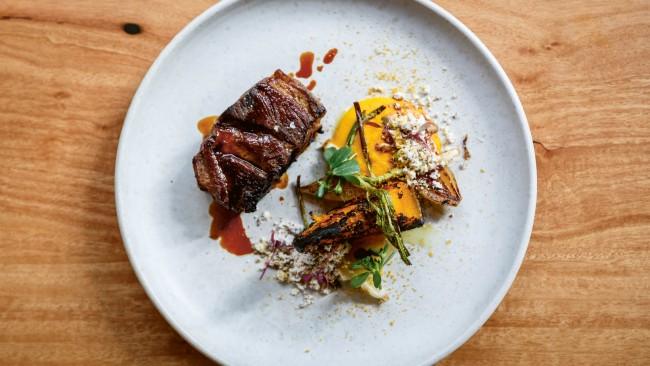 Dining at Yarri in Dunsborough

Ten minutes away in Dunsborough, stylish Yarri makes the most of abundant local produce to create an exquisite set menu. One of the few choices I have to make when ordering is whether to add an extra snack, a tiger prawn impaled on a skewer with rich XO butter and crispy fried saltbush. It’s a simple decision. From the chef’s counter, I watch the team build mountains of cured kingfish and finely shaved daikon atop beds of yuzu crème Fraiche and grill thick slabs of wagyu but the highlight of the meal is an incredible dessert of salted caramel dulce de leche and passionfruit sorbet wrapped in a fluffy coconut foam so that it resembles a giant poached egg. 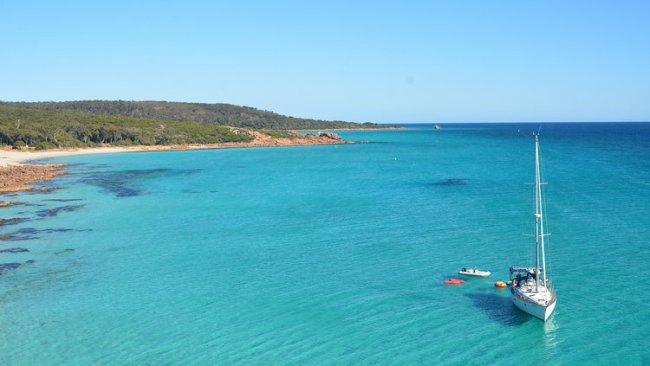 The next day I’m observing Dunsborough from a different angle aboard a 41-foot yacht with Sailing Charters WA. North-facing Geographe Bay is conveniently protected from the ocean’s full might but skipper Luke can still find enough breeze to fill the sails as we float past white-sand beaches and rocky headlands on the BYO cruise. The sandy seafloor gives the ocean a uniform turquoise color that proves too inviting to resist, and when I finish swimming there’s a cold drink waiting for me, along with a soundtrack of smooth jazz that captures the mood perfectly. 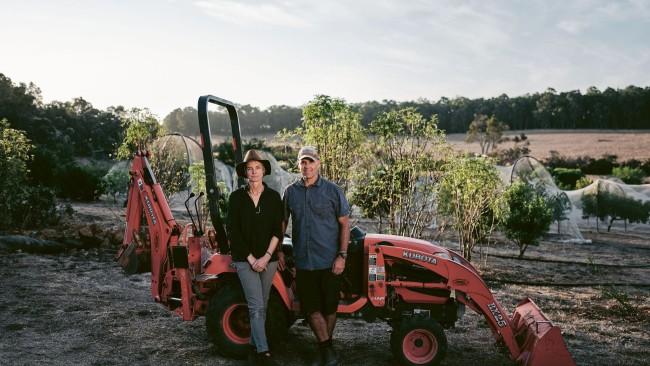 Cree and Tim at One Table Farm

Margaret River is not a region prone to rushing and the benefits of that leisurely pace is on full display at One Table Farm in Cowaramup, where owners Tim and Cree have created a cooking school fuelled by a thriving veggie patch and an orchard of 80 fruit and nut trees. Students pick, prepare and cook the meals themselves – they do everything except the dishes – and the first step is a treasure hunt that has me prowling the gardens in search of juicy capers, crisp asparagus spears standing at attention and globe artichokes shrouded in thick, leathery leaves.

Looking out over the farm, which still includes paddocks stretching towards a patch of dense bush, I marvel at how rich this land is, in produce and the range of experiences on offer. More than simply a river, a wine region, or a town, Margaret River is a nature lover’s paradise and a food bowl that rewards curiosity.