Heather Porter had never heard of the Larapinta Trail until she went to America.

She was tackling one of the most famous hikes in the United States, the Pacific Crest Trail, which winds 4,265 along the west coast from Mexico to Canada. When other hikers found out she was from Australia, they would ask if she’d walked the Larapinta. She had to Google it to find out what it was.

“It’s ironic that I was in another country, doing one of its iconic hikes, but I hadn’t even heard of the iconic hikes in Australia,” she laughs. “But once you know about something, it just keeps popping up everywhere. I was really drawn to it. It’s such a different landscape to any of the other hikes I’d done.”

The Larapinta Trail is a 223km walk through the heart of the outback. It starts in Alice Springs and finishes at Mount Sonder, winding its way through the arid red dirt of the West MacDonnell Ranges.

It’s a stunning track that has become renowned for combining spectacular scenery with an incredible walking experience since it opened in 2002. Think shelters at every trailhead, freshwater trucked out to tanks along the way (which means a guaranteed supply), clear signposting, pit toilets, and solar-charged USB ports. It’s also possible to hike in sections, simply by driving to the various trailheads.

Porter traveled to the outback this year and completed the 223km trail in 14 days. Although she’s a very experienced hiker, and this is a long and challenging trail, she says it’s actually pretty beginner-friendly. The catch is the heat, which ranges from 30 degrees during the day to single digits at night. For that reason, the season stretches from April to September to avoid the scorching desert summer.

“It’s becoming a very popular trail, especially now while all the borders are closed. People in Australia are seeking adventure everywhere they can,” she says. “The trail was really well marked and quite easy to follow – the only thing I would say is that people should prepare for the full range of temperatures.” 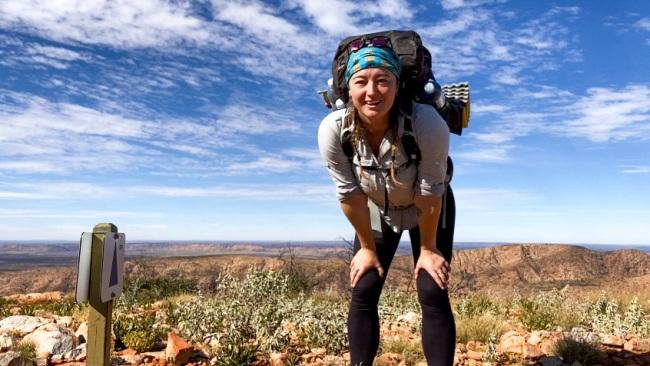 Her timing was incredible. Months earlier, the region flooded, which created a super bloom. The whole region was surprisingly green, she explains, with desert flowers and temporary water holes popping up everywhere. There’s a special kind of magic on this land. It’s culturally significant, the traditional home to the Arrente people, whose history dates back 40,000 years. The trail passes many sacred sites.

“There’s a real sense of sacredness around it, especially the waterholes,” Porter says. “There was big energy in those spaces, that was something I hadn’t experienced before. It’s very historically rich.”

Although she hiked it solo, Porter was very rarely alone. Some people hiked the whole thing; others dipped in and out. When asked about safety, she laughs and says she’s always felt safer on trails than in cities. However, she does hike with a Garmin inReach, which is a type of satellite communication device that can send and receive text messages. The only things that made her nervous were the dingoes.

“They don’t hurt people, but if you leave belongings out, they’ll pull your tent out and all your food,” she says. “As someone who is terrified of dogs, that was a bit scary, with the howling in the distance.” 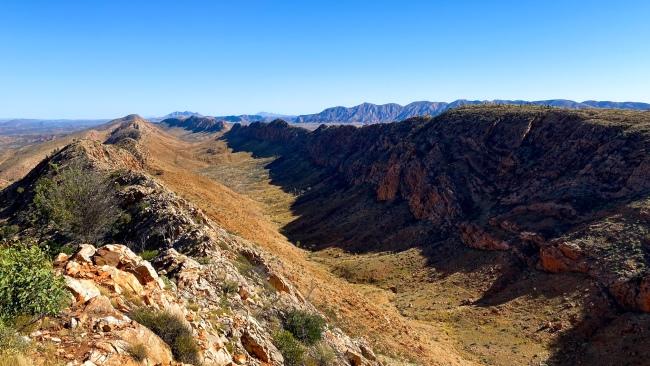 It’s best hiked during winter, or between April and September. Picture: Supplied

Realistically, however, it simply adds to the adventure. The West MacDonnell Ranges create a terrain unlike any other. Steep hills and deep valleys create fascinating topography, such as parallel ridges, with breathtaking views and shady swimming spots where you can cool off along the way. It’s a must-do for all adventurers looking for a way to escape off-grid for a couple of weeks and reconnect with nature.

“There aren’t many hikes I would do again, because I’m all about trying new things,” Porter says. “But this is one of them. You get there and you’re like, ‘Wow, this place is special’.”