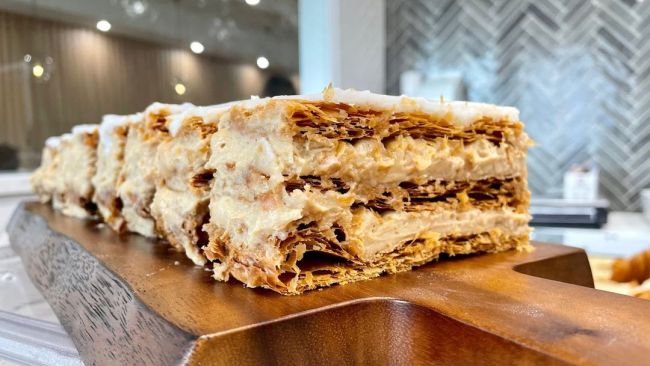 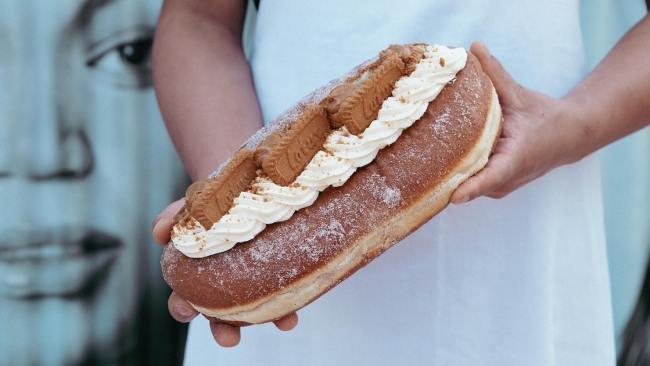 If exploring the Sunshine Coast I cannot resist a trip to the Kenilworth Bakery. They have donuts in every size, including an 800g chocolate ring (yum!) and their 1kg range that is big enough to feed a family. They offer plenty of other baked treats, including dog biscuits if you’ve got a furry friend road-tripping with you 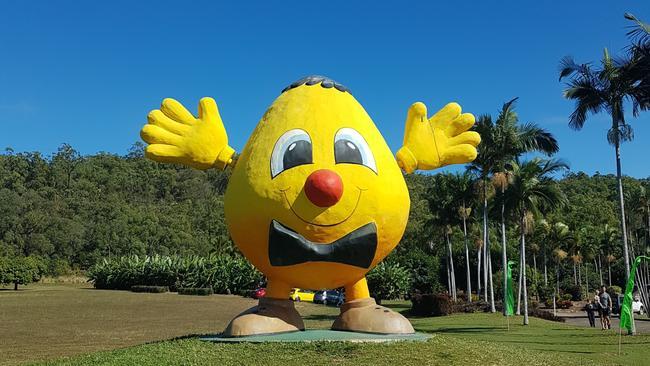 Frosty Mango is impossible to miss, with a cheery bow-tie-wearing mango statue out the front. It has a broad smile, with two big hands waving hello, and almost instantly an orderly collection of folks gathers at his feet ready to pose for selfies. (Guilty as charged – how could you resist?)  And smoothies. My goodness, the smoothies. Cold, made from sun-ripened fruit harvested from one of the 550 trees right out the back, it’s easy to see why it’s a local icon. As a picture of Paul Mercurio on the wall declares, “Jeez it’s good”. 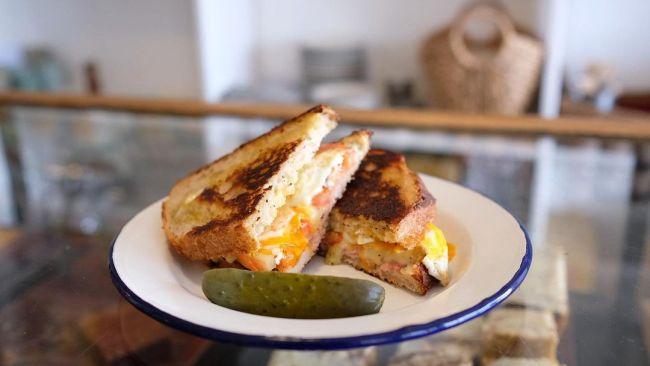 I have to say, I look forward to a Maccas stop on any road trip. It is the only time of the year that I’ll pull in for a cheeseburger. BUT on a recent trip to Thredbo in the Snowy Mountains, we had heard about a cafe just off the Federal Highway in NSW serving up homemade meals and decent coffee. Some Cafe, in the tiny town of Collector, is now home to the toastie I’ll never forget. Their smoked free-range ham, tomato, and cheddar with a side of pickle was pure perfection. It’s been on the menu since the cafe’s beginnings and the owners have no intention of it going anywhere. Pair it with a perfectly made flat white – it’s the best way to break up the six-hour drive.

Emma Markezic, Contributor – Insane sliver of pork, from The Flackyard, Pinnacle in the Mackay region, QLD 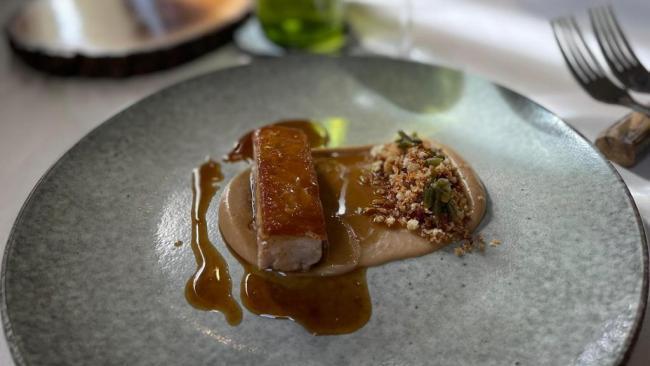 I was touring Far North Queensland when a local told me about a finger of pork the likes of which you’ve never tasted in your life. It turns out she was right. The morsel in question was the free-range pork with bunya nut, muntries, and seafern from The Flackyard – a fine bush dining restaurant in the absolute middle of nowhere (so much so, they’ll help set you up in glamping-style accommodation should you get stuck). The restaurant almost exclusively sources from local people, communities and Aboriginal businesses, and their degustations feature everything from kangaroo with bush mint to emu egg with wild lemongrass. It was the chef’s signature pork dish though, that really boiled my potatoes. 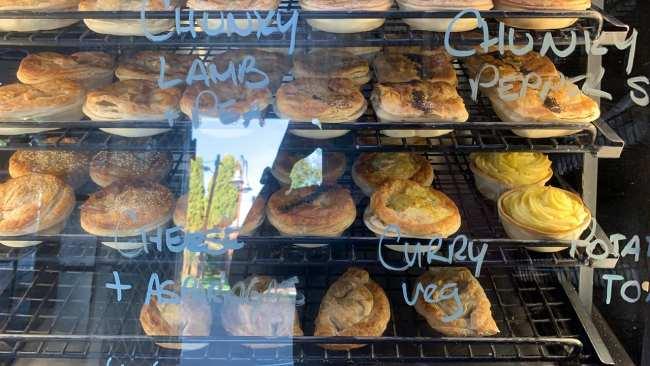 It’s been quite a few years since I visited Dorrigo in the NSW Northern Tablelands but it’s still front of mind as a road trip highlight. It’s the gateway to the World Heritage-listed Dorrigo National Park, but it’s not so much the rainforest and waterfalls that have stuck with me as the remarkable pastry-and-pasta combo that is the Dorrigo Bakery‘s chicken and mushroom fettuccine pastie. (Carb haters, drive on by!) It blew my mind then, and it still amazes me it hasn’t caught on everywhere. 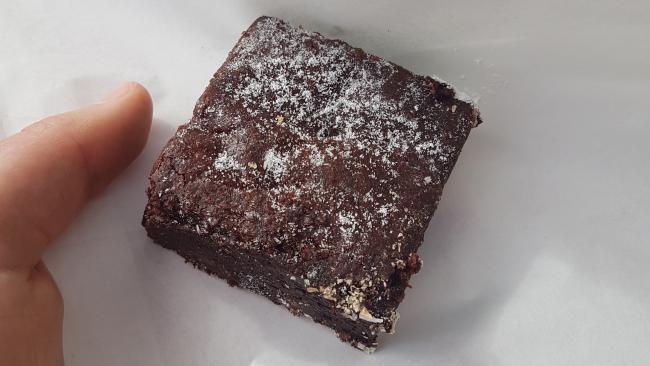 Top-shelf brownies need chocolatey deliciousness with hints of choc chips and walnuts inside, sprinkled with icing sugar. As for the all-important fudginess, it needs to be moist enough that it melts in your mouth, but dry enough that it maintains its structural integrity. Fellow sweet tooths, this is the gold standard. Inevitably, you’ll want to sneak back the next day for another (as I did, thrice).

Forever a fanboy of Evelyn Waughs Brideshead Revisited, I never balk at the opportunity to have a Brandy Alexander – a creamy concoction of cognac, creme de cacaro, thickened cream and adorned with a whisper of nutmeg. On frequent road trips through the Blue Mountains of NSW I always make a point of stopping Katoomba’s The Carrington Hotel, where they make them in droves during the winter months and are best enjoyed rugged up in the heritage-listed Victorian lounge. As Brideshead’s Anthony Blanche says, “Yum-yum.” 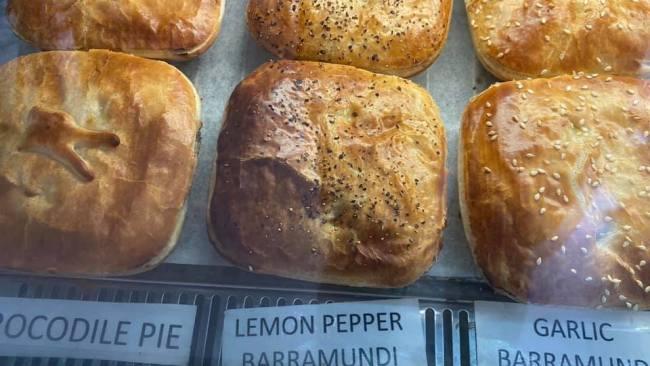 It’s a big call, and I know it may upset the folk at Burketown – the self-proclaimed barramundi capital of the world in Queensland – but I’m going to make it: the best barra pies are from the Croc Café & Bakery in Wyndham, about an hour’s drive north of Kununurra near the end (or start, depending on where you’ve come from) of the Gibb River Road in the Kimberley. Bigger than you’d expect, the pastry’s perfectly flaky, the filling creamy and just a little spicy, and because this is prime barra country, the cooks don’t skimp on the fish. Wyndham’s a long way from anywhere, but these pies make it worth the trip, although the scenery on the way is pretty awesome too.

Build it and they will come… this is true for Doma cafe in Federal within the Byron Bay hinterland.

With a wide variety of fresh, authentic Japanese food you won’t be disappointed. I went for one of the daily specials which was a Rakkenji charcoal sandwich with house-smoked Salmon, olive, and anchovy.

This place is popular with the locals which is always a good sign, so try and get there early if you can.

Doma has an outdoor courtyard area but you can also just grab a takeaway and eat in the local park across the road. 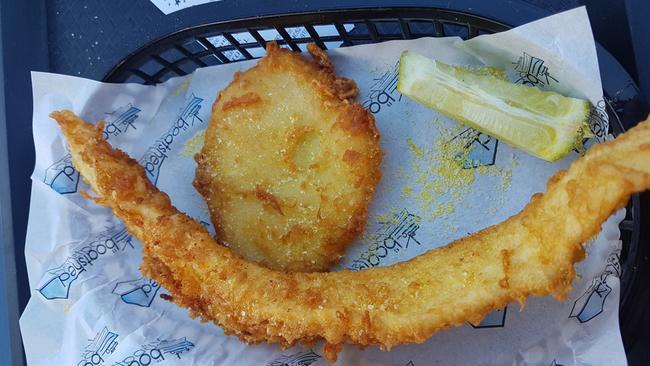 The silky slivers of white flesh dissolve in my mouth, while the crispy golden batter encasing them gives a satisfying and surprisingly grease-free crunch. It’s the first time I’ve ever tried a piece of flake with a squeeze of fresh lime juice, and it’s a winning combination. The sour kick cuts beautifully through every mouthful, adding a modern twist to a classic holiday dish in a classic holiday destination. 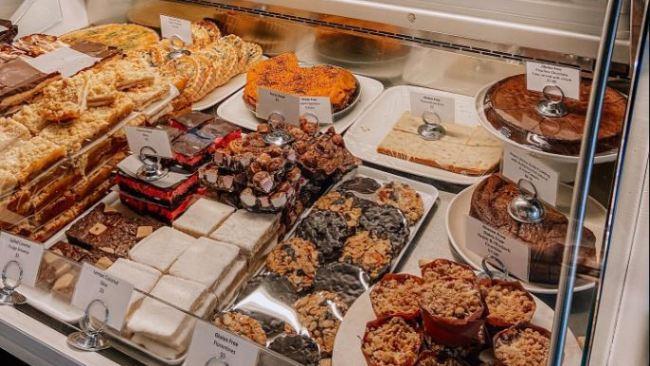 Needing an urgent pit-stop between Sydney and Castlemaine in Victoria I literally ran into The Merino Cafe at Gunning, choosing it over the servo for obvious reasons.  Feeling sheepish on retreat (no pun intended) I felt compelled to buy something, anything. Peering into the glass counter I noted a library worth of old-fashioned slices; fine pastry and biscuit bases topped with lush, chewy caramel and golden macadamias, fruit crumble, marshmallowy rocky road, lemon-coconut, and the like. Next to them, fudgy brownies,  jam drops, and Monte Carlo biscuits  – all made on the premises.  I bought a variety, for research purposes only, and on first bite was transported back to my grandmother’s kitchen and the sweet aromas of golden syrup, toasted nuts, and melted chocolate. I’m planning a return just to try the pies!

In the wilds of the Eyre Peninsula, in tiny Tumby Bay, there’s an excellent (and very unexpected) cafe called L’Anse making French pastries as good as any you’ll get in Paris.

Also on the Eyre Peninsula, at Port Lincoln, The Fresh Fish Place is the spot for Southern Ocean seafood served raw, cooked or smoked. It’s a fishmonger and restaurant – grab a table for a seafood platter of smoked oysters, king prawns, sashimi kingfish etc, or pick up some packaged ‘octopus hands’ or King George Whiting from Cape Catastrophe to take home/on the road.

But the truth is, I usually just buy ham and salad rolls when I’m on the road. Holbrook Bakery on the Hume does a great one. 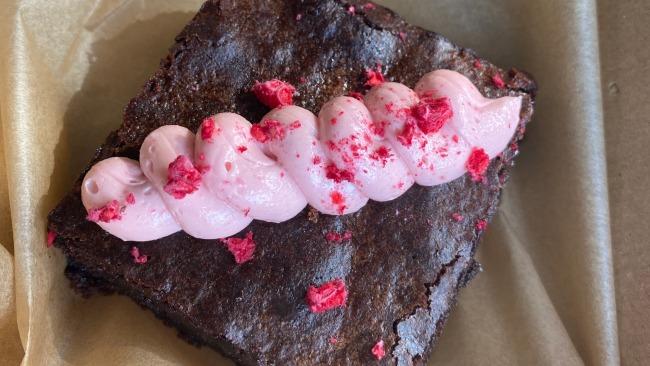 After hiking in the rainforest of Tamborine National Park my reward was a chocolate brownie from Picnic Real Food Bar, a delightful cafe that’s part of the North Stores hub on the picturesque main street of North Tamborine. Rich, gooey, and not too sweet with soft peaks of raspberry cream, I almost did another walk just so I could go back for seconds.

Western NSW isn’t exactly the center of the culinary universe (in fact it’s a long, long way from wherever that is) but one thing they usually do pretty well out there is steak. Big Steak. The 400 gram Wagyu rump at the Deniliquin RSL is truly magnificent, and a bargain at $37. Rockpool? Nah, Deni’s the go-to place for steak. 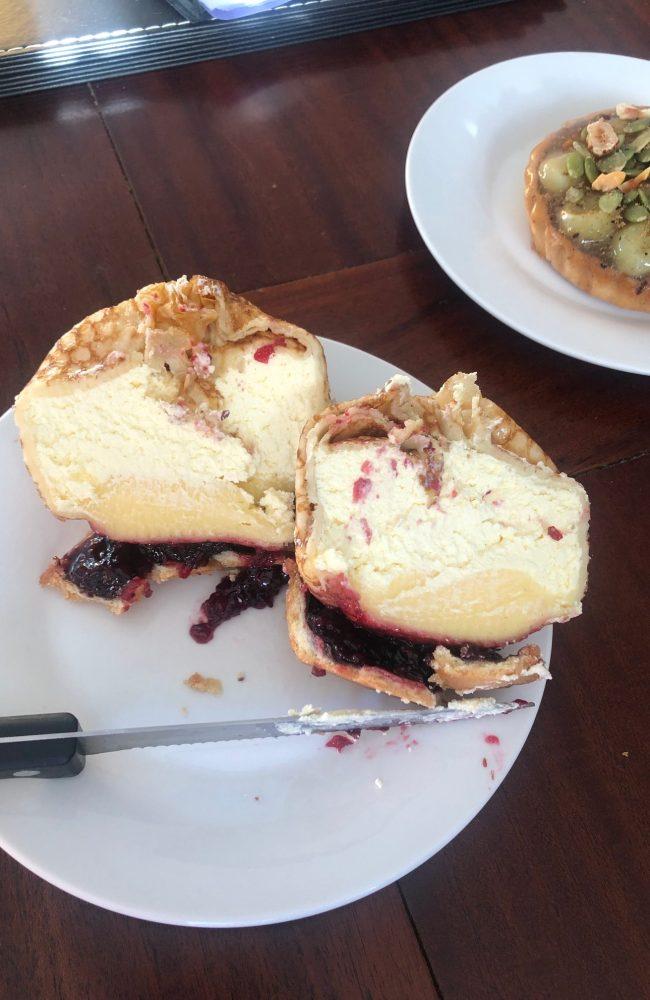 Before heading off on a road trip up Tasmania’s east coast in 2019, we ducked into this little cake shop in North Hobart for a little sustenance before we set off. I still bang on about this mind-boggling dessert to anyone who will listen. What you see here is a crepe, made into a tart, and filled with lavender cream, lemon curd, and blackberry compote. It sounds like way, way too much (and I believe I originally ordered it thinking I was being funny), but gosh damn if it wasn’t one of the best cakes I have ever had. 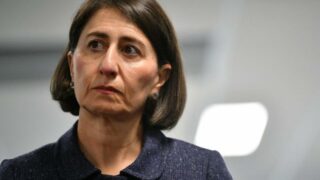 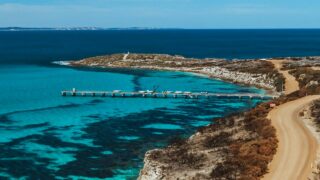