It’s almost the most wonderful time of the year and plans are hastily being made for many a trip overseas for the holidays. With peak season around the corner, international flights for Christmas and New Year’s will inevitably sell out fast.

So, if you’re looking to snap up the best business-class deals, it’s worth booking in sooner rather than later. Whether you’re jetting off to the city of love or looking forward to boating around the markets on a Bangkok adventure, we’ve found the best Christmas business-class deals leaving from Sydney to make sure you arrive in luxurious comfort.

From bustling street markets selling delicious local hawker food to fun cocktails served at luxe rooftop bars, Singapore has something for everyone. Home to one of the most beautiful airports on the planet, architectural wonders and greenery permeate the city. Singapore is also regarded as one of the cleanest and safest cities in South-East Asia.

Well worth an extended stopover, a few weeks in Singapore around Christmas is best for those keen to nab stress-free business class deals. If you’re looking to enjoy some downtime in this pristine city, take it easy on one of Qantas’s lie-flat sky beds on board one of the carrier’s flagship A380s on the eight-hour flight over.

The capital of France has lost none of its lustre in the last few years. In fact, many would agree the city is more exciting and trendy than ever, with the city preparing to host the 2024 Summer Olympics. Filled with history, art, restaurants and bars, Paris maintains its romantic allure and a relaxing business class seat with Qantas this Christmas would be the perfect way to arrive to the city in comfort and style.

Singapore Airlines and German carrier Lufthansa are offering a luxurious way to rediscover the wonder and charm of this breathtakingly beautiful city. The total travel time from Sydney to Paris is a manageable 25 hours with one stopover at Changi Airport. Experience the luxury of a Boeing 777-300ER on the flight arriving in Paris after flying on the A380-800 aircraft between Sydney and Singapore.

There are two types of people who like to visit Rome: one of them likes to enjoy the continental spread put on in their hotel for breakfast, and the other likes a quick walk down to the street to enjoy the hustle and bustle and a rich Italian coffee at the espresso bar.

Cobblestone streets mix with ancient architecture to give the city a uniquely energetic buzz perfectly suited to its vivacious residents. Make sure you arrive in Rome well-rested on a Qantas business class flight onboard a spacious A380 to London. Once landed, there’s a short stopover and then a business class flight on British Airways to take you to the Italian capital in just under three hours.

There’s nowhere on Earth like Bangkok, one of South-East Asia’s most central and well-connected cities. A quick flight, drive or train ride takes you to tropical white sandy beaches in the south and mountain villages in the north, or you could stick around to experience floating markets and gorgeous temples in Thailand’s capital.

The city never sleeps and residents are friendly. Just be careful not to hire a deceptively powerful motorcycle as the locals make weaving through heavy traffic look way too easy. Direct flights from Sydney to Bangkok take around nine and a half hours and Qantas’ lie-flat bed makes it easy to catch some sleep before you arrive.

Los Angeles is one of the most recognisable cities in the world and for good reason. The largest city in the largest US state by population beckons those who are looking for a slice of Hollywood glamour this Christmas. Multiple theme parks will keep the kids entertained and if you’re happy to hit the tourist trail, the city is very well-equipped to provide you with a taste of the glamorous LA life.

Finding a business class deal is by far the best way to fly to LA and Qantas’ Christmas deals will have you hitting the boutiques, beautiful beaches and hip bars this west coast city has in spades. One 14-hour flight will take you from Sydney to LA and is made very comfortable by the gorgeously luxuriant business class seats onboard the A380. Select from the Neil Perry-inspired menu and lie back for a good night’s sleep before arriving refreshed and ready to hit the town.

Giorgio Armani has partnered with Middle Eastern airline Etihad to deliver a sumptuous business-class collaboration, curating a new dining experience onboard the airline, as well as providing ceramics, glassware, cutlery and even Armani-branded salt and pepper containers. 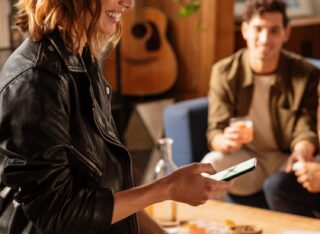 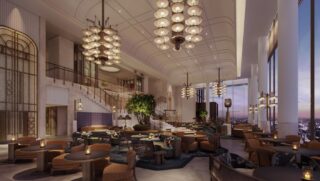 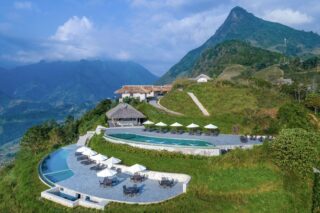 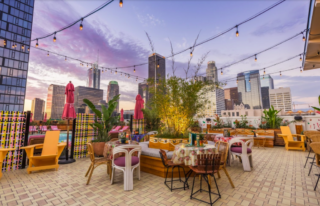